In the mystic land of Prydain, a demonic spirit was captured in the form of a great, black cauldron. Hidden for centuries, evil men have searched to harness its magical powers to rule the world! The Horned King is the main antagonist of Disney’s 1985 film, The Black Cauldron, who seeks to unleash an army of skeletal zombies, the Cauldron Born. All will be lost if the Horned King works his black magic and creates his army of deathless warriors. Will he succeed? A magical puzzle for any fan! 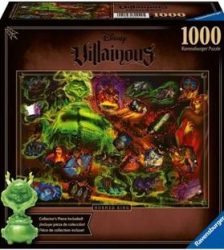